Despite the fact that there are only 3 official images of new percussionist, the information that so-called Tortilla Man gives about himself is enough to reveal that he is clearly not one of any listed above candidates.

Based on the most clear studio picture of a new percussionist it is seen that the iris of his eyes have shades of green color. Of course, there is a small chance that he wore contact lenses for that picture. But since there’s only one photo where it is possible to see percussionist’s eyes it is reasonable to assume that Slipknot are not interested in creating maximum amount of mystery around the new member. Nevertheless, such factors as body characteristics have almost no mystery.

According to the Google Search, the height of Sid Wilson (#0, DJ) is 1.74 cm. Based on the little dance dance he had with Tortilla Man at Rock Am Ring 2019 it can be noticed that he is a couple cm taller than Sid. Which makes him about 176 cm. And whether it is a footage of Unsainted, a full show at the aforementioned festival or the best live footage of a new percussionist, it can also be noticed that his posture is perfect. Therefore, the following conclusions about new member can be made.

This information may serve as a temporal go-to data for determining whether it matches the features of “potential” candidates.

Why Not Dave Grohl

Why Not Mike Portnoy

Additional Reason: other things on his schedule.

According to his official instagram page, Mike Portnoy peacefully works in studio and also enjoys his life at other various places outside of it. It is no-brainer that professional with his level of talent, success and busyness will not be trying that hard to imitate a settle life in U.S., while being on the road with other 8 musicians in Europe.

Why Not Zach Hill

Many people consider this theory the most plausible. Google gives no results on the height of Zach Hill. Although it is not difficult to measure it based on the picture he had with Al Jourgensen (both Death Grips and Ministry had a tour in 2017). 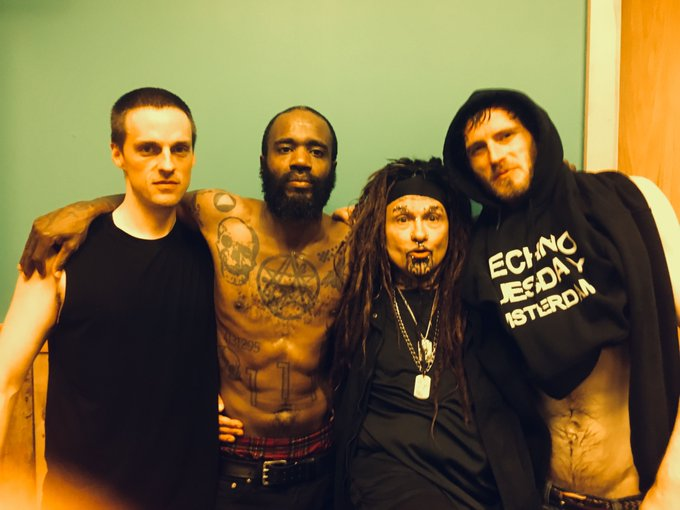 Al Jourgensen’s height is 1,73 cm. On the picture Zach (corner right) looks at least 10 cm taller than Al. It looks like Al stands on one leg, but it also clear that Zach slouches and leans to the side. According to the most “modest” calculations he is at least 15 cm taller than Al. It makes him even taller than Dave Grohl. Plus, Zach’s natural posture is slightly slouched, unlike Tortilla Man

On top of that, on the 8th of June both Death Grips and Slipknot also had shows in different countries (England and Germany). Which means that Zach would not be able to play at two venues at the same time.

Why Not Joey Jordison

Jordison expressed his desire to be part of the Slipknot in the future someday. But one of the biggest if not the main reasons of departure from the band was his suffering from the disease called transverse myelitis. In one of the interviews he described the situation at that time: “I lost legs”. He continued: “I couldn’t play any more. It was a form of multiple sclerosis, which I wouldn’t wish on my worst enemy.” After the years of rehabilitation he reportedly got recovered. One of the Knot’s biggest contributors would never agree to risk his health and drumming career by having a growth surgery at 44 years old, in order to not look like Joey Jordison and to play only percussion(!) right in front of the person who plays his own created rhythms.

Why Not Griffin Taylor

Corey Taylor’s height is 1.7. Which makes him about 6 cm shorter than new member. Griffin Taylor is shorter than Corey almost in the same proportion. Not to mention Griffin was born 7 years after Slipknot’s formation. As a teenager, his lifestyle is cardinally different from his farther and colleagues.

The Main Reason: He was on the same stage with new percussionist. It can be clearly seen in the end of the same Rock Am Ring show. After handing his mallets to a girl from the audience, Tortilla Man ran to the corner of the stage. It was exactly where he passed by Simon Crahan. Shawn, his son and his daughter went out to greet the audience.

The Main Reason: he didn’t act like a family member.

The argument that rejects this theory comes with the last Rock Am Ring reference. As Tortilla Man was running to the backstage, he passed by his “siblings” without even high-fiving to one of them. Considering the tragic loss of Gabriel Crahan, the gesture of mutual support would’ve been inevitable. Especially because the small interaction might’ve happened almost unnoticeable for the audience.

The identity of Slipknot’s new member was discussed by the band only once. Shawn Crahan made the official statement. “The position you may or may not be talking about is nobody’s fucking business,” Clown responded, before emphasising that it’ll be up to the fans to make up their own minds once they catch Slipknot performing live across the world this year: “The proof is in the pudding.”

Based on these words, theoretically it is a musician that audience already knows. As many may fans have already noticed, the mask of the new character starts to “peel off”. The big holes have already appeared on parietal bone of the skull. Some believe that this person is bald, while others assume that this his mask has a couple of layers. Whatever it hides under, it will continue to make Slipknot one of the most intriguing and fascinating active veteran caliber bands.

About Author: Zack Hargrove is a blogger and remote editor. You can always catch him up on Twitter @zackhargrovejr. If you get anxiety during computer classes, feel free to use his tips on programming help and get professional service on his website.

Steamhouse Rock Nights presented by Jeff Keenan is a full 2 hour ride of non-stop air guitar anthems, rock classics and best new releases from the rock world, with features that include the New Bangers of the week and the Steamhouse Top 5, this is a show that will grab you by the short and curlies and have you head banging to your hearts content.

What Role Does Music Play in Our Life?

5 Not Widely Known Facts About John 5